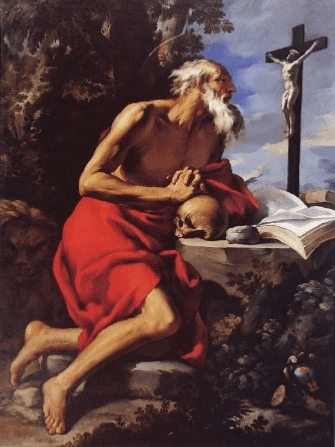 “Ignorance of Scripture is ignorance of Christ.” These words spoken by our next intellectual of Church history capture the heart of his life and mission. Born 347 AD in modern-day Albania, Jerome grew up in a Catholic family. His parents provided him with a fine education in his youth and even sent him to Rome for further study in his young adult years. Jerome received the sacrament of Baptism in 366 AD at the age of 19 and began to live a life of intense study, fasting and prayer. He went to live with a group of Christians in Northern Italy before moving East where he became a hermit residing in the desert caves of Syria. It was during this time that Jerome, who had a natural gift for languages, learned Greek and Hebrew so at to transcribe ancient texts. The young Roman also focused much of his energies to prayer and repentance. In his earlier years, he struggled with several vices, not least of which was the sin of wrath. Jerome had a quick temper, sarcastic tone and would often curse or use foul words when angered. He also had little patience for stupidity or shallowness. This caused him to make a number of enemies throughout his life, particularly in Rome where he was disliked by both the clergy and pagan officials. To combat this sin of wrath, Jerome would carry a stone with him wherever he went. Anytime he cursed or committed a sin against charity, he would use the stone to beat his chest as penance for his actions. By the end of his life, his chest developed callouses and scars from the frequency of the thrashings. Jerome, and indeed every saint, was human. He had personal problems he had to overcome throughout his life. Yet, what made him a saint was not that he was sinless, but that he was a sinner trying his best. He recognized his shortcomings and sought constantly to improve them turning towards God in constant prayer, fasting and study. In 385 AD, the 38 year-old Jerome went on pilgrimage to the Holy Land and Egypt. The following year he visited the city of Bethlehem where he had a profound encounter with the Lord. The young priest decided to make Bethlehem his home. He lived there until his death in 420 AD dedicating himself to what would become one of the most important task in Western history; the translation of the Bible into Latin. Until this point, the scriptures were in Greek and Hebrew making them inaccessible to many Christians. Jerome sought to remedy this issue by providing the world’s first translation of the Bible 1000 years before Martin Luther was even born. It is thanks to St. Jerome’s efforts that the European continent and eventually all of Western Civilization was able to read, teach and produce the Bible for the masses.