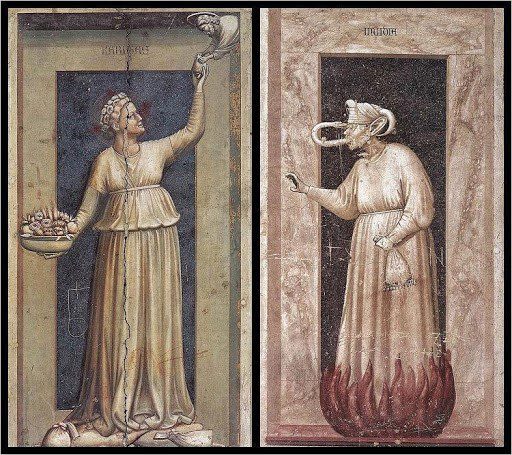 In the ancient city of Padua, Italy there is a 14th century chapel built by Enrico Scrovengi. Considered one of the greatest examples of early Renaissance artistry, the building was painted by the illustrious Giotto and boasts some of the most spectacular frescoes in the world. I can personally attest to the magnificence of these frescoes. When I first saw them, I was struck by their stunning clarity and spiritual significance.

Yet, the paintings that most drew my eye were not the so much the one’s depicting the Life of Christ or even the grand fresco of the Final Judgement. Rather, it was a collection of small figures flanking the chapel walls that caught my attention. On one side, there were seven humanoid creatures grotesque and off-putting. The opposite wall likewise had seven characters, but in contrast to their counterparts, they each possessed a comeliness that was quite attractive. Above the fourteen figures heads was inscribed fourteen words in Latin. Upon closer examination, I was able to translate each word. Over the heads of the beastly creatures was listed the seven deadly sins while the characters donned one of the seven Christian virtues. I was struck by the genius of Giotto’s painting. With an artist’s wit, he was able to highlight the tension between that age-old struggle of vice and virtue.

The seven deadly sins were first categorized by St. Gregory the Great in the 6th century. He listed them as follows: pride, greed, lust, envy, gluttony, wrath, and sloth. The saintly pope coupled these vices with corresponding virtues which help us counter the effects of the deadly sins. These virtues are humility, charity, chastity, gratitude, temperance, patience, and diligence.

Many of us are unfamiliar with the seven deadly sins and seven Christian virtues. This is dangerous. For if we are not aware of how sin acts and the way Satan deceives us, how can we possibly follow Christ? Furthermore, how can we be a holy disciples if we are not privy to the anecdotes for our vices? In the upcoming series, I will spend time reflecting on the seven deadly sins and seven Christian virtues respectively. This will help us to grow in a deeper awareness of our souls and how we can grow in holiness.