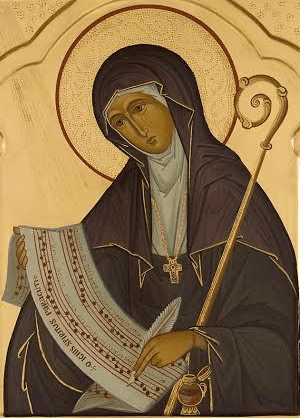 We turn now to one of the most influential women of the Middle Ages. Hildegard was born in 1098 AD, the tenth child of a noble German family. Her father and mother were employed by the Count of Sponheim. From an early age, Hildegard was gifted with visions and powerful divine experiences. The parents of the young mystic decided to send her to become a nun at the age of eight with the Benedictine Order. Hildegard was so advanced in the spiritual life that she made her perpetual profession as a nun only six years later at the age of fourteen! She became apprenticed to another older sister named Jutta who formed Hildegard in piety and charitable service teaching her to serve the poor and the dying. Yet, Hildegard longed for intellectual formation. Jutta, being herself unlearned, was not able to instruct the bright young girl and so Hildegard began to teach herself the basic rudiments of education in various fields of study. She was particularly gifted in the area of music. The young woman learned how to play the ten-stringed psaltery, an ancient instrument used for chanting with which she became quite proficient. This would become a chief outlet of creativity for Hildegard. As a matter of fact, in the next several years, the nun revolutionized music theory providing the foundations of what would eventually become modern music notation and melody. After being elected the Abbess of her monastery in 1136 AD, Hildegard became a prolific writer publishing several major works including two volumes on the practice of medicine, a Gospel commentary, a musical, a book which invented a new language entitled the Lingua Ignota and over 400 letters to various prominent leaders of the Middle Ages. However, she is best known for her three outstanding books on visionary theology: Scivias (Know the Ways of the Lord) , Liber Vitae Meritorum (Book of the Rewards of Life), and Liber Divinorum Operum (The Work of God). Each of these books reflect on the work of God in history and the importance of the human person’s response to this divine activity. Hildegard gained great fame throughout Europe for these writings. As mentioned before, Hildegard had a deep love for music. Just like Pope Gregory the Great 500 years earlier, Hildegard did much to promote the cause of sacred music composing many beautiful and complex pieces before her death. These chants are still used to this day and are considered among the most important musical pieces in Western civilization. Due to her unparalleled contributions to the Catholic Church, Pope Benedict XVI named Hildegard a Doctor of the Church in 2012 recognizing her as one of the greatest saints in the history of Christianity.