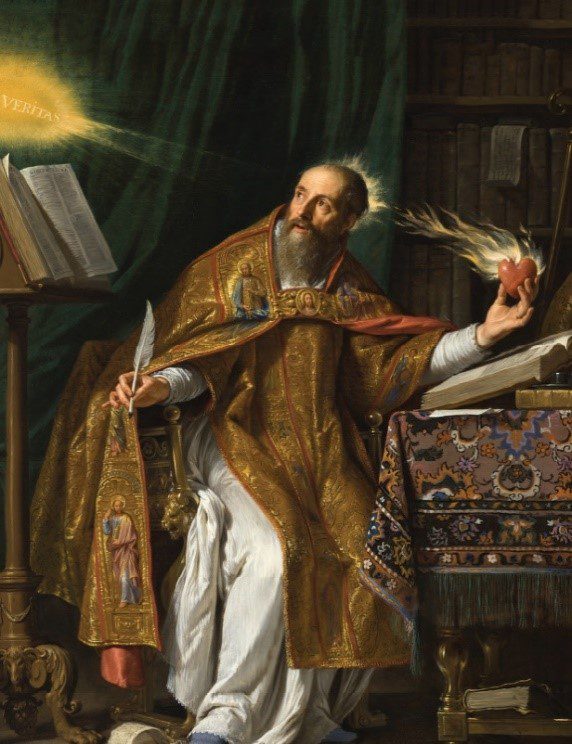 St. Augustine converted to Christianity April 24th, 387 AD after 33 years of soul searching and argumentation. The venerable Ambrose had finally convinced this young intellectual about the truth of Catholicism and now Augustine sought to understand his newfound religion. He returned to Africa with several friends hoping to live a monastic life of study and prayer. Augustine’s mother died shortly after their arrival, but not before seeing her son become a Christian, a grace for which she prayed more than three decades. He was later ordained a priest in 391 AD dedicating his time to prayer, study and preaching. The young priest’s reputation for zealous preaching, intelligent dialogue and moving writings began to spread far and wide throughout the region and soon he was called upon to become the bishop of his home diocese in Hippo. Augustine was ordained a bishop in 395 AD at the age of 41, only four years after his ordination to the priesthood. As a bishop, the saint’s influence could be felt throughout the universal Church. He immediately employed his gifts of intellect to the service of the Gospel entering into heated debates with various heretics and working tirelessly to promote the teachings of Catholicism. It is difficult to explain the ramifications of Augustinian thought on the history of Western civilization. He is by far one of the most important thinkers in history. His writings provide the basis of discussion for various fields of study in the West including politics, free-will, original sin, just-war theory, epistemology, predestination, slavery, sexuality and natural sciences. One of his greatest contributions to the Church, however, is his book entitled The Confessions. This is the world’s first autobiography conveying beautifully moving account of a human beings life. Till this day, Augustine’s Confessions is recognized as a cornerstone of literature and anthropology. In this gripping account of the saint’s life, he pulls no punches in telling the reader where he has failed and triumphed, sinned and achieved holiness. In the end, it is a MUST READ book for every Christian telling the story of how one of the Church’s greatest enemies became one of her greatest saints. St. Augustine represents one of those men in history who held the delicate balance between faith and reason. So often in modern society, these two realities are seen as opponents; one is either rational and unreligious or irrational and religious. This is a lie. These are not the only two options. There is such a thing as a rational religious person. As a matter of fact, only such a person can truly be called rational and religious. What Augustine’s life teaches us is that faith and reason are both necessary for the development of a truly religious person. In the words of St. John Paul II, faith and reason are like “two wings” upon which the human spirit soars into intelligence. Only someone who possesses these two wings can properly be called a Catholic.