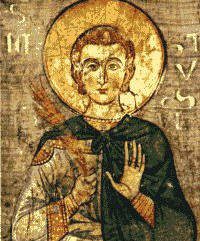 To begin our series on the great intellectuals of Church history, we will reflect on the 2nd century deacon and martyr St. Justin. Born around the year 100 AD, Justin grew up in the region of Samaria (Modern day Israel/Palestine). As a young man, he acquainted himself with various pagan schools of Greek thought becoming a well-versed philosopher and public speaker. However, despite his success and brilliance, the youthful Samarian remained unsatisfied. One day, as he was walking along the seashore, lost in thought, he met an old man. They began a conversation in which Justin shared his disillusion with the world of the Greek thinkers and his struggle to find purpose in life. The old man told Justin that he would never find happiness in gaining simply human knowledge and achievements. In the end, there is an ache at the core of our being which can only be quenched by a higher truth, an ultimate truth. Before departing, the old man revealed that he was a Christian and prompted Justin to pray for the light of wisdom so that his eyes might be opened to the freedom of truth. This was a turning point in Justin’s life. He became a Christian and immediately started using his intellectual gifts to bring others into the Catholic faith. He founded a school in Rome where he taught the “true philosophy” of salvation. Soon, his fame spread as a teacher and preacher. It was during this time that Justin produced his philosophical masterpiece entitled The Apology (from the Greek word apologia meaning “defense of reason/logic”). Addressed to the Roman emperor Antonius Pius and his adopted sons Marcus Aurelius and Lucius Verus, this work sought to defend the Catholic faith as the fullness of truth. Furthermore, it presented sophisticated arguments extrapolating the Christian religion and its sacraments particularly the Eucharist. In the end, Justin’s influence became so powerful, the emperor had him arrested for being a Catholic. At his trial, he and several companions were offered the opportunity to be released if they would offer sacrifices to the pagan gods. They refused. At this, the Roman official over-seeing their trial said, “If you do not obey, you will be tortured without mercy.” To this Justin replied, “That is our desire, to be tortured for Our Lord, Jesus Christ, and so to be saved.” Justin was beheaded in 165AD, yet his influence remains in the history of the West. He was one of the first thinkers in Western Civilization to reveal that the Christian faith is fully co-operative with reason. Even more, he teaches us that Catholicism poses no threat to intellectualism, but rather, deepens and refines human reason taking it beyond itself into a more profound brilliance.