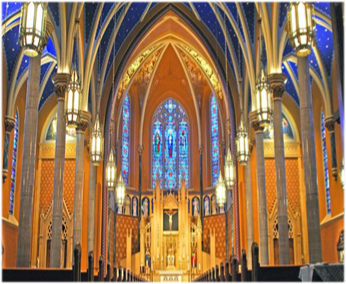 Last week we learned that to be intellectual is more than simply being a brainiac or a know-it-all. Rather, a person who is intellectual is one who engages reality as a whole. Modern scientism eschews any talk about the transcendent or heavenly. Yet, this has not stopped humanity from being drawn to these realities. Modern scientism does not look at reality as a whole, but only in a very small and superficial part. The physical realm is only a section of existence. Human persons are composed of body and soul. Thus, there is a physical and spiritual component to our existence. We are beings who are simultaneously in the world, but not purely worldly. We have appetites and desires of the flesh, but also appetites and desires of the soul. What is seen and empirically proven is not enough for us; we want more. One of the major problems in contemporary society is that we live as if these spiritual appetites are non-existent. So, we attempt to satiate spiritual realities with physical things. One of the most common         manifestations of this fact nowadays is the deep ache for self-identity, purpose and relationship which is so often malnourished by superficialities; Netflix binges, hours on Facebook, video games, drug-abuse, pornography…all of these things are used to fill a whole in the heart. I remember once watching a sunset and being brought to tears by its beauty. Why? Why did a big ball of hydrogen millions of miles away cause me to cry. Science would say that it was merely the activity of chemical reactions in my brain. But is that satisfactory? Is that also why the poet writes of the blue-jay’s song or the musician composes a hymn professing his love for his beloved? Is that why Michelangelo carved the Pieta or Shakespeare penned Hamlet? Science has no answer for these realities because they are beyond the scientific.  The most intelligent person, therefore, is the one   who can recognize the importance of both the physical and spiritual realm of existence. They are people who appreciate the seriousness of humanity’s questions on all levels. Whereas scientific atheism or agnosticism fails, rejects or refuses questions outright, Catholicism takes every longing of the human heart into consideration dedicating thousands of years of study and contemplation upon the most fundamental questions of humanity. Only in the Catholic Church can you find a nun who fed the poor while pioneering the field of computer science such as Sr. Mary Kenneth or a priest who says Mass in the morning and invents the Big-Bang Theory in the afternoon such as Fr. Georges Lemaître. These are people who live to the fullness of their humanity, they are truly intelligent people because they are people who have encountered the font of all wisdom: Jesus Christ the Lord.