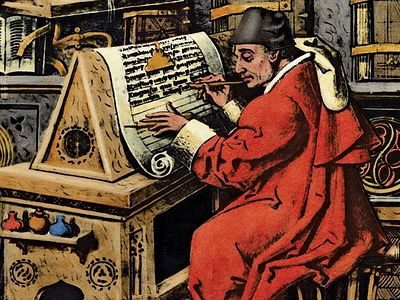 It is no exaggeration to say that the Catholic Church saved Western Civilization. After the fall of Rome in 476 AD, much of the prestigious culture enjoyed by the European continent ceased to exist over-night. Countless people were slaughtered and cities were burned to the ground. Along with this invasion came the mass destruction of knowledge. Libraries and schools were demolished leading to the loss of priceless books and documents on philosophy, theology, physical sciences, mathematics, language arts, and history plunging Europe into what is commonly called the “Dark Ages”. All hope for the rebuilding of a civilized and educated world was lost…or so it seemed. Miraculously, copies of these works were preserved in different African and Middle Eastern libraries far from the incursions of the Gothic hordes. By the 6th century, copies of these precious texts had made their way back to the European mainland where Catholic monks began fervently copying and translating them for distribution. These holy men spent hours every day in a place called the scriptorium (literally “a place for writing”) where they hand-wrote hundreds of thousands of pages, copying everything from the Iliad of Homer to the Gospels of the Bible. Furthermore, they ensured that multiple copies of these texts were given to different monasteries throughout Europe to keep the knowledge from being lost to history. This conservation of both religious and secular texts by the Catholic Church led to a re-birth of intellectualism in Europe. With this rediscovered knowledge, the Church opened universities providing what would become the foundations of all modern education. Eventually, Western civilization would blossom into an age of phenomenal spiritual, academic, cultural and social progression beginning with the Scholasticism of St. Thomas Aquinas and reaching its peak with the Renaissance of the 14th and 15th centuries. What I have illustrated above in summary form is the fact that the Catholic Church possesses a proud history of contributing to civilization and the development of society. These accomplishments have been attained by brilliant men and women throughout the Church’s 2000 year life and continues to this day. For the next several weeks, we will be highlighting the lives and works of several of these men and women elaborating on their achievements and how they helped to make known the splendor of our faith.