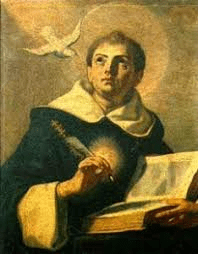 Last week we learned about St. Thomas’ early life. In this article we will focus on his intellectual career and the invaluable contributions he made to Western Civilization. In order to appreciate Thomas’ mind, however, we must first appreciate the mind who formed it, namely, St. Albert the Great. When Thomas arrived at the University of Paris in 1245 AD, most of his peers considered him to be unintelligent. He never answered questions in class and rarely partook of group discussions, preferring to study in private. On top of that, he had a husky and big-boned figure. For these reasons, he earned the nickname “The Big Dumb Ox.” But St. Albert was not fooled. He saw in this quiet pupil the potential for genius. One day, when other students were mocking Thomas as “The Big Dumb Ox,” St. Albert famously rebuked them saying, “Be careful…for when this Ox roars, the whole world will hear it.” This exhortation was prophetic. For the next 29 years, Thomas would write over 100,000 pages of documents. He had completed seven books before the age of 30 and by the end of his life, he had written 20 major works, 16 of which were comprised of multi-volume sets equaling over 100 books. He would usually write five to seven books at a time, one of which he would write with his own hand while verbally dictating the others to scribes who wrote down his every word. The most famous series written by St. Thomas Aquinas is his Summa Theologica, a summary of all the theology of the Catholic Church. In this multi-volume work, Thomas tackles every question imaginable with more than 3000 articles and 10,000 responses to a series of topics from the existence of God to the Church’s teaching on social justice. What is most unique about this masterpiece of world literature and science is not only the vast scope of its study, but also the structure. It is written in a “question and answer” format. Thomas first states the question with its objection giving full credence to the views that oppose the Catholic Church. Then, he responds to these objections one by one. In the end, Thomas’ critiques of the Church are much more eloquent and intelligent than arguments invented by modern day atheists and his responses are even better. It is no exaggeration to say that St. Thomas Aquinas is one of the greatest geniuses of history. Furthermore, he is a Catholic saint. I assert that there is certainly a connection between these two facts.