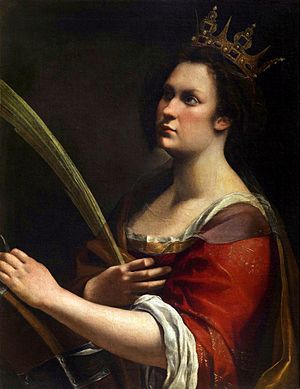 To continue our reflections on the Church’s great intellectuals, we turn to the brilliant and courageous Catherine of Alexandria. Born 287 AD in Egypt, Catherine was the daughter of a Roman governor who ruled over the region of Alexandria. At a young age, she devoted herself to intense study immediately being recognized for her talents in rhetoric, logic and philosophy. Before her eighteenth birthday, Catherine had already become an accomplished scholar. Although raised as a pagan, she converted to Christianity at the age of fourteen. In 305 AD, Emperor Maxentius began a vicious persecution of Catholics. Catherine decided to meet the emperor personally and condemn his actions. Maxentius saw Catherine’s visit as the perfect opportunity to embarrass the Christian religion and reveal its irrationality. He summoned 50 of the most educated scholars and scientists of the Empire to challenge Catherine in a debate. The 18 year-old young woman stood fearlessly before the Roman court. The Emperor had no idea who he was dealing with; this woman would not be intimated by his scholars or armies. She debated for hours. To the astonishment of the Emperor and the Roman nobility, this young woman proved more intelligent than any of the empire’s scholars. Catherine’s argumentation was eloquent, precise and rational. Soon enough, each of the 50 scholars publicly admitted defeat, unable to compete with the young woman’s knowledge. Several of them also converted to Catholicism on the spot, admitting the truth of Christ. The Emperor, infuriated in humiliation, immediately ordered her to be tortured. Catherine was whipped until her flesh was nearly torn off and then thrown in prison where she remained for twelve days. During her imprisonment, some 200 people came to visit her for counsel and advice. Catherine was told by the Emperor to renounce her religion or suffer the pains of death. She refused. Maxentius mandated her execution by way of a spiked wheel which would crush her bones. But, when Catherine touched the wheel, it broke. She was then sentenced to execution by beheading. Catherine welcomed the executioner with a gentle smile submitting to his blade willingly. She died in 305 AD at the age of 18. Till this day, St. Catherine’s life remains an example of Catholic genius. The 50 scholars who challenged Catherine thought they were rational and educated men, much like many of the militant anti-Catholic atheists and agnostics of our day. Yet, in the end, their arguments are ultimately unsatisfactory. I pray that more Catholics will follow the lead of this young woman studying the brilliance of the Catholic faith. Militant atheists and irrational scientism cannot have the last word. Catherine did not allow it and nor should we.