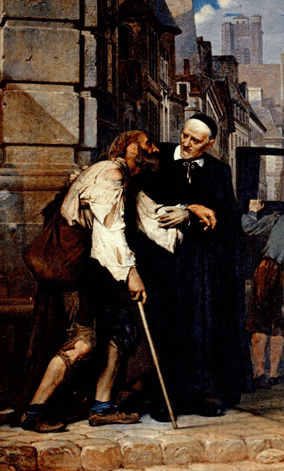 What good is it, my brothers, if someone says he has faith but does not have works? Can that faith save him? If a brother or sister has nothing to wear and has no food for the day, and one of you says to them, “Go in peace, keep warm, and eat well,” but you do not give them the necessities of the body, what good is it? So also faith of itself, if it does not have works, is dead (Jm. 2: 14-17). These words from St. James lucidly summarize the final aspect of Lenten practice: almsgiving. Charity is the hallmark Christian quality. In fact, it was the defining factor of our religion since the beginning. There are stories of Roman citizens being appalled by Catholics’ tendency to serve poor and sickly people outside of their own families. Likewise, the care of widows and orphans is alluded to several times throughout the New Testament, especially in the Acts of the Apostles and the letters of St. Paul. This Christian aptitude for charity is rooted in Christ Himself, He who came “to serve and not to be served” (Mt. 20:28). It was after the fall of the Western Roman Empire in 476 AD that the brilliance of Catholic charity started transforming the world. In an age overcome by grief, despair and ignorance, Catholic monks and nuns rose to re-build civilization from the ashes. They began with the poor. Not just the materially poor, but also the poor in mind and spirit. Here is yet another example of Christian genius: we know that poverty is not just a material reality. The worst forms of poverty our those that plague the soul. The Church strived to feed the masses, nourishing their bodies and hearts. The various religious orders of the Middle Ages built public schools and libraries as well as established the world’s first universities and orphanages. Structures were constructed to house the homeless and convents provided food for the hungry. Thanks to Catholic almsgiving, Western Europe was saved from utter ruin. That proud history continued through the ages from the drama of the Napoleonic wars to the hatred of the Nazi regime; the Church has always been there to support the destitute and welcome the stranger. Truly, the Catholic Church is the hand of Christ stretched throughout history, the way He continues to share His loving mercy with the world. Lent is a time to ask ourselves how we are contributing to this prestigious lineage of Catholic almsgiving? How do we share of our time, talent and treasure so as to continue the mission of Christ in history? Will we be numbered among those who have redeemed our civilization or those who sit on the sidelines while it slowly decays?