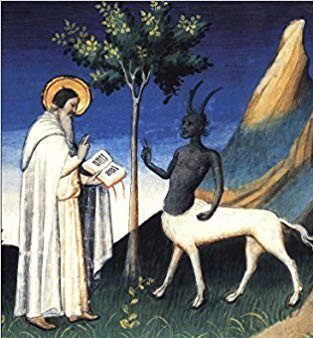 During the first century of Catholicism, thousands of people gave their lives for the faith. The sacrifice of these men, women and children martyrs became the crowning glory of the Church. It was an act admired and emulated by all Christians. Then, in February of 313 AD, the Emperor Constantine legalized the practice of Catholicism on the Roman Empire ending nearly three centuries of persecution. This posed a unique problem to the Church. Martyrdom proved a sure means of devoting one’s whole life to God. But now, with the threat of death removed by the Edict of Milan, 4th century Catholics had to find new ways to sacrifice and serve the Lord. There solution was nothing short of novel. Hundreds of men and women started fleeing to the deserts of Africa and Asia Minor taking refuge in caves. Here, they would lead lives of solitude, austerity, penance and prayer for the Lord. This new form of sanctity offered a replacement for the “red” martyrdom of blood with the “white” martyrdom of the spirit. Little did these men and women know, they were starting what would become one of the most important traditions in Western Civilization: monasticism. Through their lives of intense prayer and mortification, these Christians pioneered a whole new experience of Christian living hitherto unknown. These “monks” as they would come to be called, produced a plethora of saints rich in wisdom and mysticism. Unfortunately, much of their writings and teachings have been lost to history. However, several small fragments of their sayings are preserved in a little book entitled The Desert Fathers: Sayings of the Early Christian Monks. This book relates numerous stories and pithy quotes of various monks from the early period of Catholicism. In this collection, we can read about monks such as John the Short, Joseph of Thebes, John Cassian and several anonymous authors. For example, in saying number twelve, we hear the monk Poemen tell us, “To be on guard, to meditate within, to judge with discernment: these are the three works of the soul.” Again, in saying number forty-nine we hear Hyperichius say, “The monk [person] who cannot control his [her] tongue when they are angry will not control their passions at other times.” The book is full of bits if wisdom such as these. It is a simple read, some sections being a single sentence in length. Overall, it is a book that every Catholic should read and a rich part of our Christian tradition.