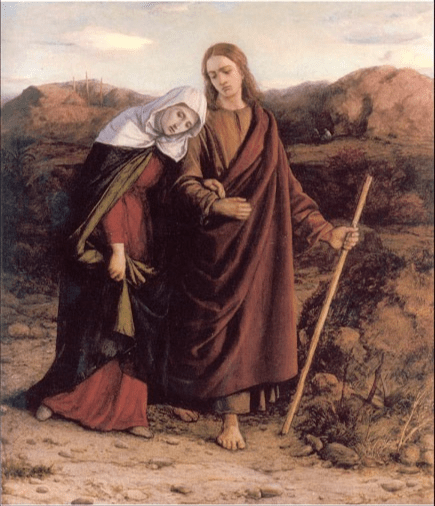 “Behold your Mother” (Jn. 19:27). John, the beloved disciple, is given to Mary as a son and Mary is given to the beloved disciple as a mother. What is the significance of this adoption? Up to that moment, the heart of Mary had been crushed and broken as she watched  her Son being murdered. Now, the reason behind such affliction is made plain. The crushing of the Mother’s heart has been for the sake of its renovation and expansion; a re-forging of her Motherhood to embrace the entirety God’s children as represented in the person of John. Now she, the Immaculate One who assented unyieldingly to God’s  mission, will become the model and  patroness of all those who strive to love her Son. At last, the vocation of Our Lady is fully revealed. She is not simply Jesus’ biological mother. Her role in Christianity is much more radical. Given to each other as a gift, the Mother and the disciple must love one another. From the cross, Christ makes clear the fact that a relationship with His Mother is not an option for His disciples; she was essential for His life and so it will be for all of those who desire to follow Him. Devotion to Mary, to know her and to love her, is not some obscure invented practice of Medieval Catholicism; it is a basic Christian attitude. Intrinsically tied to the witnessing of her Son’s death and reception of the  Father’s will for Him on the cross, Mary’s virginal heart which provided a home for God now provides a home for all humanity. In the words of Nicholas of Biard, “When she [Mary] stood before the cross, it was the whole Church who stood there in her.” She is our Mother, the Mother of the Church. In these past weeks of reflections, I have attempted to deepen our appreciation of the Blessed Virgin Mary’s role in salvation history. Over and against the short-sighted and anti-Christian presentation of Mary as being nothing more than Jesus’ earthly mother, we have  seen, through a deep and serious reflection on Sacred Scripture, that the role of this woman goes far beyond giving birth to the Lord (even though that alone should be enough to honor her). Our Lady is an integral part of Christ’s mission. With His final breaths, Jesus cries out: “Behold your mother.” These words from Our Lord are enough for me. I will behold Your mother O Lord. I will behold this woman who first beheld You hoping that, by Your grace, I too may worthily call her my mother, Mary…Mother of God.