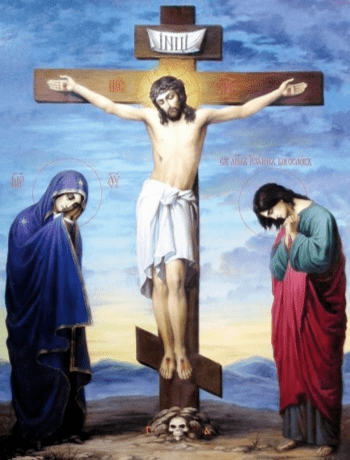 This last article on the Blessed Virgin Mary will be  divided into two parts both of which will be an exposition on the interaction between Christ and     His Mother on Calvary. One of the fundamental flaws of contemporary Protestantism is a reduction of the Blessed Mother and her role in the process of salvation. She is seen by some Protestant denominations as nothing more than a temporary vessel, a sort of divine petri-dish used by God to self-cultivate his own humanity and   so enter the physical realm. Yet, the original Christian tradition (aka Catholicism) has always seen her significance in its entirety. As a matter of fact, the Annunciation and  Nativity of Christ is properly understood as the beginning of Mary’s mission. In truth, the fullness of Mary’s role in salvation history is revealed at the foot of the cross. At that moment, from the bloodied lips of our tortured Savior, we hear a stunning declaration addressed to Mary and St. John the Apostle: “Woman behold you son!” (Jn. 19:26). These are not simply the words of a temporary adoption or some form of ancient social security to make sure that Mary will be cared for in her old age. Christ is making an official decree as to the role of the Blessed Mother in Christianity. There are two points of interest in this passage. First, Mary is addressed before John. This is no coincidence. As with all things in the life of Christ, this too is by design. Mary is spoken to first because she is the primary recipient of the gift of Christ crucified. She is the prophesied “Daughter Zion” (Is. 62:11, Mic. 4:13, Zech. 9:9) who receives the gift of the crucified God indefectibly and definitively on behalf of Israel and indeed all of creation. She is the creature of God par excellence, uncorrupted and thus able to unconditionally and freely accept the sacrificial love of her Son. Her “yes” to Christ’s sacrifice is what makes our “yes” possible. For, if she had not been present at the Crucifixion to witness and accept the sacrifice of her Son, which is the ultimate gift of the Father to humanity, then no other human person could share in the fruit of its salvation. This sheds light on the second point of this passage. Mary is addressed as “Woman” (Γύναι). The Lord recognizes the Blessed Virgin at this moment as more than just His biological mother; she is woman, the woman above all other women. Just as God formed a creature out of the side of Adam in the Garden of Eden calling her “woman” (Gen. 2:22), so now, the New Adam looks down upon the creature who will be created out of His pierced side, the New Eve, calling her “woman” (Jn. 19:26). From her devotion is born Mater Ecclesia; Mother Church.