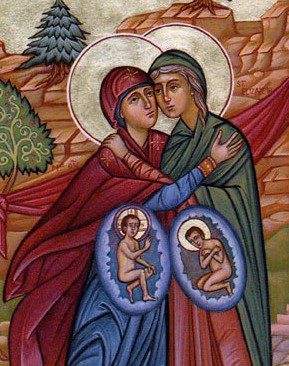 “Blessed are you who Believed”

In the Gospel of Luke 1:39-45, we read about the Visitation of the Virgin Mary to her cousin Elizabeth. Upon hearing the voice of the Blessed Mother, the infant in Elizabeth’s womb leapt for joy and the aging woman, “filled with the Holy Spirit” exclaimed, “Blessed are you among women and blessed is the fruit of your womb!” (Lk. 1:41-42). This interaction between Mary and Elizabeth is so rich in theological content and historical significance that it will be impossible to adequately address all of the details within this short article.  However, let us seek at least to scratch the surface of this highly momentous biblical event. There are five person immediately involved in the Visitation. On the one hand, we have Elizabeth and John the Baptist. Elizabeth is the wife of Zechariah, a priest of Israel. John, their son, is the one destined to be the final prophet of the Jewish nation. Thus, we see in the persons of Elizabeth and John the Baptist an embodiment of the Old Testament in its priestly and prophetic role. On the other hand, there is the Virgin Mary and Jesus Christ. The womb of Mary is the new Ark of the Convent holding a treasure much greater than the rod of Jesse or the tablets of God’s Commandments (c.f. Heb. 9:4). Rather, within her is held the incarnate fulfillment of the law and the prophets. It is for this reason that St. Luke mentions John the Baptist “leaping” in the womb before the Blessed Mother. Just as King David danced before the Ark of the Covenant when it was brought into the city of Jerusalem (2 Sam. 6:14), so now John the Baptist also dances before the new Ark of the new covenant as she ushers in Him who is the hope of all peoples. The Visitation, therefore, is the personified meeting of the Old Testament and the New Testament. In the embrace of these two mothers and their sons, we witness the People of David embracing the Church of Christ. This meeting is mediated by the person of the Holy Spirit who Himself declares Mary’s fidelity and preciousness to God when He inspires Elizabeth to praise the Virgin’s faith: “Blessed are you who believed” (Lk. 1:45). Yes. Blessed is she whose faith is greater than Abraham or Jacob, Moses or Isaiah, Esther or Deborah. Blessed is she who believed and whose faith opened the way for Christ’s coming into the world.