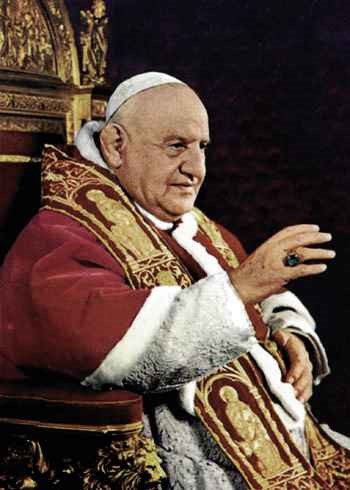 On October 11th 1962, St. John XXIII did something no one was expecting. Due to his age, many of the Cardinals presumed the Italian pontiff’s reign would be stagnant and uneventful. Little did they know, the Holy Spirit had other plans. From the hallowed halls of the Holy See, the saintly pope announced he would convene an Ecumenical Council intended to reflect upon and renew the mission of the Church in the Modern World. The Second Vatican Council is one of the most important events in recent Church history. Yet, many Catholics are unaware of what this Council accomplished and remain ignorant of its intention. For this reason, I find it profitable for us to spend the next several weeks reflecting on Vatican II. I will be publishing important sections of different speeches and documents created by the Council. Sometimes, I will comment on different aspects of the texts, especially those areas which are currently most misrepresented. Please read them understanding that it is our generation that has been entrusted with properly implementing the teachings of Vatican II. I will close today’s article with a clipping from St. John XXIII opening address: “Mother Church rejoices that, by the singular gift of Divine Providence, the longed-for day has finally dawned when —under the auspices of the virgin Mother of God, whose maternal dignity is commemorated on this feast — the Second Vatican Ecumenical Council is being solemnly opened here beside St. Peter’s tomb. The great problem confronting the world after almost two thousand years remains unchanged. Christ is ever resplendent as the center of history and of life. Men are either with Him and His Church, and then they enjoy light, goodness, order, and peace. Or else they are without Him, or against Him, and deliberately opposed to His Church. The greatest concern of the Ecumenical Council is this: that the sacred deposit of Christian doctrine should be guarded and taught more efficaciously. That doctrine embraces the whole of man, composed as he is of body and soul. And, since he is a pilgrim on this earth, it commands him to tend always toward heaven. In order, however, that this doctrine may influence the numerous fields of human activity, with reference to individuals, to families, and to social life, it is necessary first of all that the Church should never depart from the sacred patrimony of truth received from the Fathers. But at the same time she must ever look to the present, to the new conditions and new forms of life introduced into the modern world which have opened new avenues to the Catholic apostolate. Almighty God! In Thee we place all our confidence, not trusting in our own strength. Look down benignly upon these pastors of Thy Church.”