The Little Flowers of St. Francis 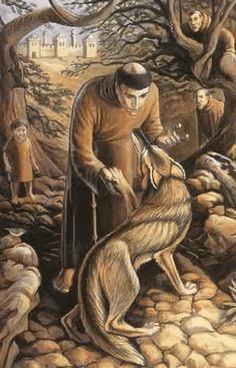 Returning to our series on books every Catholic should read, we move into the Middle Ages. Our next book comes from the most important figure of the Middle Ages: St. Francis of Assisi. There are no words to express the importance of this figure. His life single-handedly revolutionized Medieval times leading to a cultural and spiritual renewal the likes of which had not been experienced since St. Benedict 600 years prior. Being a man of extreme simplicity and poverty, Francis did not leave behind long discourses or lengthy treatises. Furthermore, he disliked recognition. Thankfully, several of his disciples collected a series of his letters as well as compiled a plethora of stories from the saint’s daily life. This compilation came to be known as The Little Flowers of St. Francis. Of all the books suggested so far, this is the easiest to read. Arranged into a collection of 53 short chapters, each conveying a different story or letter from St. Francis, the book is a little gem of Church history. One could easily read one chapter a day or even read them to children. Each chapter is intriguing giving insight into the daily life of one of history’s most beloved personages. One of the most famous stories recounts the encounter between St. Francis and a ravenous wolf who was terrorizing the Italian city of Gubbio. The wild animal would often attack the livestock in the village and even threatened several people’s lives. Fearing for the safety of their children, the people of the city decided to lead a hunting party to kill the wolf. St. Francis implored them to reconsider reminding them that the wolf was only doing what was natural as one of God’s creatures. The people were unconvinced. Francis asked them to give him a chance to speak with the wolf so as to tame it. If he could not do so, then the villages could slay the beast. Francis went to the edge of the forest where the canine lived. The animal charged at him ferociously. St. Francis calmly made the sign of the cross in the air towards the wolf and cried out, “Brother wolf!” The animal stopped in its tracks and walked up to the humble friar gentle as a lamb. From that day forward, the villagers protected the animal as a personal pet. A statue remains of the wolf in Gubbio until this very day. This is just one of the many delightful accounts you can read in the Little Flowers of St. Francis. There are also several inspiring stories about Francis’ personal spiritual practices. A wonderful book that every Catholic should read. Fr. Blake Britton